Serial port splitters are software programs that can turn one physical serial port into multiple virtual serial ports. When serial port splitters are being discussed, the first question asked is usually "why would I want to do that?".  To answer that, you need to know that serial ports can generally only be used by one program at a time. Let's suppose that you use DxLab software for logging and rig control. To do that you just connected a computer to the radio to read the frequency, log it, and QSY the radio when you click on a spot from the Dx cluster.

OK, simple enough. But suppose you want to run another program at the same time and you want that program to also communicate with the radio. For example, you might want to enter a Dx contest and use a dedicated contest logger like N1MM and at the same time run DxLab in order to watch for new band countries. and QSY the radio to the spotted frequency. Well, now you have a problem. You shouldn't set two programs to use the same serial port, nor can you use a Y cable. If you do, both programs will try to communicate with the radio on that port and neither will work. What you need is a way to "split" the radio's serial port into two distinct ports so it can communicate with more than one program. Since Ham Radio Deluxe is a dedicated stand alone program for controlling radios, you might even want a third serial port for that in order to be able  to run it and keep DxLab open for logging and spotting. It's very convenient to create a virtual serial port for each program you run that needs access to the serial port connected to the radio. Then you don't have to worry about which programs happen to be open. They could all be open and it wouldn't matter.  (The only program I've used that doesn't play nice is WSJT-X for FT8. I run it on a virtual port, but cannot have any other rig control programs open while it is running.)

That is basically a description of my setup. I have used the Eltima Serial Port Splitter successfully for several years to split a physical serial port (Com3 in my case) into three virtual serial ports (Com8,9,10). Each of my programs is set to run on one of those virtual ports and all three programs can run simultaneously. Below is a screen shot of the setup menu. You simply identify the physical port you want to split and create the virtual ports that your programs will use. Your computer treats these virtual ports as if they were physical ports. They even show up in Windows Device Manager. 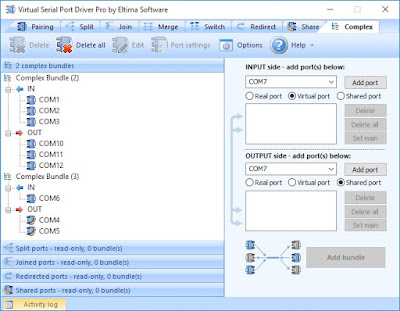