Optimizing the SunSDR2 for CW Operation

The SunSDR2 from Expert Electronics is a very powerful and flexible SDR transceiver package. The software that runs the show is stable and packed full of amazing features (like CW Skimmer integration built-in). While it performs well on CW, like most SDR radios it has a few issues with high speed CW >25 wpm.

The Sun utilizes semi-breakin CW with some nice customization settings. When using the built in keyer, the timing of CW character elements is excellent even at high speed, with no noticeable shortening of the leading element. However, it doesn't have QSK capability (the ability to hear between CW elements) because its T/R switching is not fast enough (QST measured 123ms).  While I would not place this radio in the top tier of CW performance, it is overall a very competent radio.

However, there is one issue that I needed to address. When the internal keyer is turned off and the radio is fed with an external keyer, the first element in a Morse sequence is truncated a bit (noticeable only above about 25 wpm). Fortunately, this shortening can be corrected.

The ExpertSDR software has a very cool transmit signal analyzer that can display the timing of Morse elements. At 30 wpm or so, you can clearly see the truncated elements. Using the built in analyzer, I was able to easily compensate for the shortening by adjusting the break-in timing.

These are the settings I derived for the SunSDR2 Pro when using an external winkey: 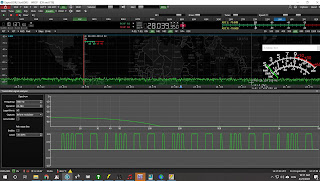 Click to Enlarge Image
Below is a screen shot after compensating for the first element shortening. Note the uniformity of the dits. 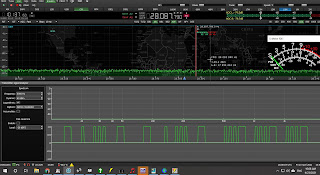 I like the EFHW for portable use because it is quick to deploy - unlike a quarter wave vertical, it doesn't require radials and unlike a dipole it's fed at one end. I have been trying out variations of the EFHW (end fed half wave) antenna for several years.These have included a 3 band trapped version (see post), a two band linked version, a two band lumped inductance version, and a fixed station 80-10 commercial version from MyAntennas.com. The later antenna is interesting because obviously the antenna is only a half wave on one band (in this case 80m). However, the 130 foot antenna is multiple half -wave lengths on all the other HF bands; 2 (half-wave lengths) on 40, 3 on 30m, 4 on 20m, 5 on 17m, 6 on 15m, 7 on 12m, and 8 on 10m. Interestingly, aside from the radiation pattern, the antenna behaves just like an EFHW on these other bands. It is resonant on these higher frequency bands with essentially the same high feedpoint impedance as 80m presents, resulting in a low SWR across multiple bands when matched with the transformer. So, let's call it an EFHW and just make the W plural = waves.

After getting good results with the MyAntennas 80-10 model at V31DJ, I got the idea to make a lightweight QRP 40-10 version of that antenna for SOTA and POTA activations. This antenna was cut for 40m, which is multiple half-wave lengths on three other bands; 2  (half-waves) on 20m, 3 on 15m, and 4 on 10m. The WARC bands, 30m, 17m, and 12m, can still be used, but an antenna tuner is required since this antenna is not resonant on these bands - it behaves like an end fed random length wire and needs at least one radial.

Below is a plot of the SWR. Note that the SWR at resonance is less than 1.4:1 SWR on all four bands, making it ideal for radios lacking a tuner like the IC-705 and QRP radios like the Mountain Toppers. 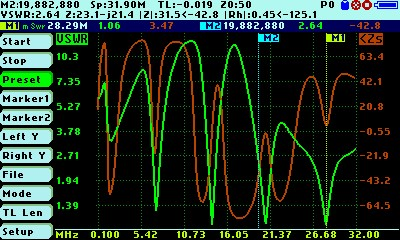 Two files for use with DxLab are provided. One is a script file to be copied onto a filter tab in DxKeeper. This script will filter the log to show only Q's greater than or equal to 15 minutes for submission to the NewsSheet Quarter QSO's list. The other is a member list formatted for SpotCollector. This list, when loaded into the SpotCollector SpecialCallsigns folder will tag FOC spots with the member name and number if the spot source foc.dj1yfk.de:7373 is active in SpotCollector SpotSources configuration. This list is provided as an example. It will not be updated so it is up to the user to keep it current by editing the list.

Click the link below to download the folder containing the two files. The size is <10k and it has been scanned for viruses.