Serial port splitters are software utility programs that can turn one physical serial port into multiple virtual serial ports. When serial port splitters are being discussed, the first question asked is usually "why would I want to do that?".  To answer that, you need to know that serial ports can generally only be used by one program at a time. Let's suppose that you use DxLab software for logging and rig control. All you had to do is just connect a computer to the radio to read the frequency, log it, and QSY the radio when you click on a spot from the Dx cluster.

OK, simple enough. But suppose you want to run another program at the same time and you want that program to also communicate with the radio. For example, you might want to enter a Dx contest and use a dedicated contest logger like N1MM and at the same time run DxLab SpotCollector in order to watch for new band countries. and QSY the radio to the spotted frequency. Or, you might want to run WSJT-X and a logging program at the same time. Well, now you have a problem. You shouldn't set two programs to use the same serial port, nor can you use a Y cable. If you do, both programs will try to communicate with the radio on that port and neither will work. What you need is a way to "split" the radio's serial port into two distinct ports so it can communicate with more than one program. You might even need a third serial port for an amp or antenna switch. Once you start automating the urge to expand tends is natural. Fortunately, it's very convenient to create a virtual serial port for each program you run that needs access to the serial port connected to the radio. Once a separate virtual port is assigned to each application you don't have to worry about which programs happen to be open before you open another. They could all be open and it wouldn't matter.

That is basically a description of my setup. I have used the Eltima Serial Port Splitter successfully for several years to split a physical serial port (Com3 in my case) into three virtual serial ports (Com8,9,10). Each of my dedicated programs is set to run on one of those virtual ports and all three programs can run simultaneously.  You simply identify the physical port you want to split and create the virtual ports that your programs will use. Your computer and software applications treat these virtual ports as if they were physical ports. They even show up in Windows Device Manager.
20210416...Update!!  I recently purchased an SDR radio. These radios generally do not have physical serial ports. Instead, they use a virtual serial port (on the ethernet connection) to communicate with software programs. That presents a problem for most serial port splitting utilities which can only split physical ports. That's the situation I ran into with Eltima. When I tried to split the radio's virtual com port the SDR's control program could no longer communicate with my logging program. Fortunately, I found a utility that can split not only physical ports but virtual ports, as well...Eterlogic VSPE (virtual serial port emulator). While this program requires a bit more geeking ability than some other solutions like Eltima, it is very flexible and powerful as well as very affordable at only $25 (try before you buy). Eterlogic is now my recommended solution, and is an essential utility for SDR owners who want to split a virtual port. Eterlogic's VSPE allows up to 8 programs to utilize one virtual serial port. If you decide to try VSPE, here are a few tips to make things go smoother: 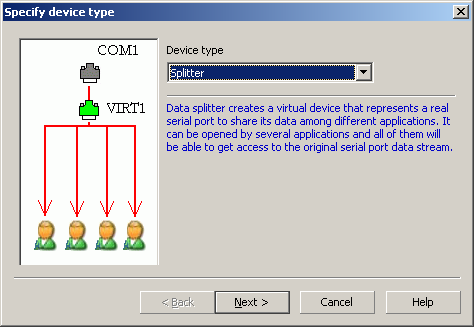 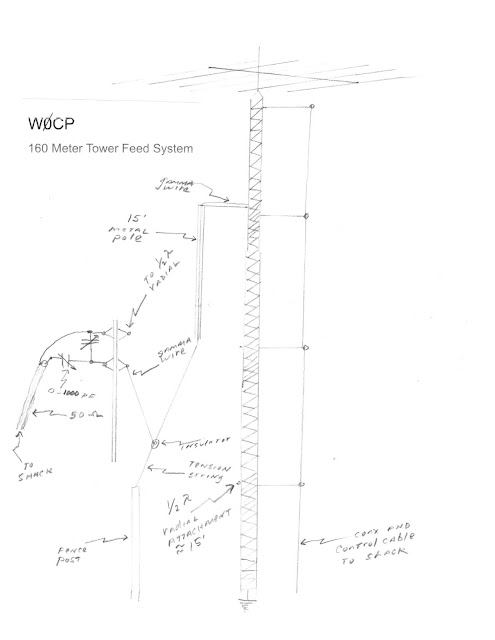 I wanted to use my tower as a vertical on 160 meters. The tower is an LM-470D motorized 70 foot crank-up supporting a ten foot mast and the following antennas: KT34XA, 40-2CD, 3el 6m, and 80 meter quarter wave sloper This system is designed to allow the tower to be raised and lowered each day. The 3 foot metal stand-off arm is attached at the third level, approximately 50 feet fully extended, and the pipe is 15 ft long. The only purpose of the pipe is to stabilize the gamma wire so that it doesn't get tangled in the tower when it is raised or retracted. There are other ways to accomplish it, but this system is simple and has proven reliable over a 20 year period. If a fixed height non-retracting tower is used, the pipe is unnecessary. I mounted the omega match inside on the barn wall to get it out of the weather. Prior to moving it to the barn, I had it at the base of the tower, first in a tupperware style container and then in a heavy duty irrigation box. In both cases, I had to regularly deal with animals, insects, and moisture. It worked, but it was high maintenance compared to this system, which has been "no maintenance". There is about 100 sq feet of aluminum sheet tied to the base of the tower, which is earth grounded. Two 1/4 wave elevated radials are attached at the top of the first section, about 15 feet off the ground. These radials are not grounded and a tap wire runs from the radials to the top feed through insulator. This system has been in use in more or less this configuration for 20 years with about 120 DXCC countries confirmed through casual DXing on the Top Band. See photos of this setup at QRZ.com.
20210427 Update: Exploding Choke forces Conversion to L Match
Little is known about the risks of shunt feeding a telescoping tower for 160 but we have some anecdotal data indicating that care is needed. In my case, all was fine until RF decided it had to find a better way to the 40 meter yagi boom and or elements  at the top of the stack. This is just a guess, but perhaps the driven element of the yagi "wanted" to be integral part of the system? A problem then arises when large currents reach the choke, which is designed to block such current flow. You can see below what 1500 watts of shunt fed power on 160 meters did to the choke! Check out VE6WZ's you tube and blog posts and you'll find a similar story. 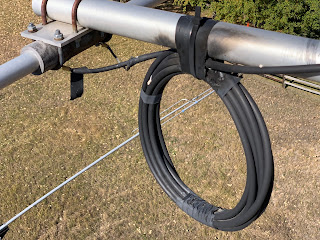 click to enlarge
My options at this point were to install a relay to ground the driven element during 160 operation or to replace the choke with a proper high power balun and hope that it wouldn't arc. I decided to go for a new balun and chose the DxEngineering MC20 with the mounting hardware that's offered for it. Unfortunately, after installation the electrical length of the tower got shorter and I could no longer match it! We tried to find out why and even ran a wire all the way up connecting all the tower sections electrically, bypassed the balun, etc., but we were never able to determine the exact mechanism for the shortening after the new balun was installed. Now, my shunt fed tower was electrically short on 160! The Omega match will only match an antenna that is electrically long.  (I have read posts on-line by hams wondering why they can't match a short tower on 160 with an omega match. If you're thinking of doing this, it won't work.) The solution was to convert to the classic L match. This resulted in a perfect match. Six months of subsequent rigorous high power testing during contests has not shown any failure or deterioration of the system. 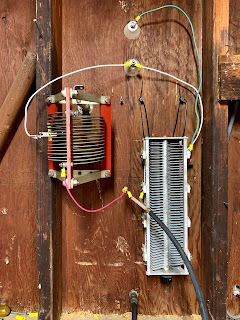 The L match mounted on the wall of the barn.
The 2kw inductor is tapped at 7 uH and the capacitor is a 90-150 pF variable
Posted by Walt W0CP at 7:16 PM No comments:

Following up on the "no-weight microphone" post (below) is an adaptation of two pin speaker mics often included with VHF HT's and readily available inexpensively on-line. These mics have the advantage of a PTT (push to talk) button. Shown above is an ear bud/mic that was included with a Pofung HT. I chose to modify this because the Elecraft headphone jack has low output and I didn't want to hold a speaker mic to my ear during reception. However, this adaptation will work for with a Kenwood style speaker mic, as well as with the ear bud mic shown above.