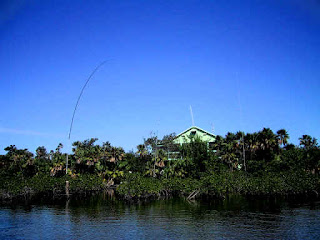 My first experience with verticals near salt water was from Belize in 1983 (V3MS). I won the world title and set a new record in the ARRL DX CW contest with very modest antennas on the beach (3 el tribander and an 80/40 vertical). For the AH1A Dxpedition  in 1993, we used a Battle Creek
Special on 160/80m and HF2-V's for 80/40. The Battle Creek special is a custom antenna available for loan to major DXpeditions. It is a large trap vertical complete with a set of radials to run out on the sand. It is shipped in a wooden crate and requires many helpers to erect safely. It is a spectacular performer. However, my requirements were for something more lightweight and easy to set up.  Over the course of several trips to Belize (now as V31DJ), I had the opportunity to experiment with various vertical configurations near and over salt water.

My first attempt at a high performance vertical on the top band was not too successful, but worked well on 80m. It consisted of an inverted L fed near the shore, with 7 ten foot elevated radials. The vertical portion of the antenna went up about 30 feet to the top of a palm and then out to a 32 foot fiberglass pole. Switching between 160 and 80 meters was accomplished by inserting and removing a jumper at the 160m point. We used an alligator clip to bypass the insulator. Since the fiberglass mast was so flexible, we simply hung a piece of nylon string off the insulator and pulled it down when we wanted to change the jumper. The antenna garnered exceptional reports on 80m, but wasn’t very effective on 160, probably due to low height.
In February of 2003, I returned again and this time I put up a dedicated 160 meter inverted L. this antenna consisted of a 20 foot Portaple ™ (a four pound aluminum mast), with a 32 foot fiberglass slipped over the top – total height about 50 feet and weight under ten pounds. I placed the antenna about 50 feet into a salt water lagoon and ran aluminum wire (low weight) up through the eyelet in the fiberglass mast and over the the crest of a two story home. The vertical portion of the antenna was brought out away from the mast at an angle and tied off to a post in the water. From there, one quarter-wave radial was run out toward the at a height of about ten feet over the water using two PVC pipes as masts. This radial was not galvanically connected to the salt water. One radial was used on purpose, to skew the pattern toward the for the CQWW160 meter contest. According to the second edition of ON4UN’s low band monitor, this is a near ideal 160 meter installation.  Typically, you see radials run into the salt water, but RF does not penetrate salt water except superficially.. In this configuration, the salt water is used as a ground screen, not as an electrical or RF ground. The return current path is provided by the elevated radial. A single EWE antenna was installed, aimed at the
For 2004, I departed from the resonant radial scheme and went to a system with 25 forty foot radials about a foot over the salt water. This was pretty easy because, as you can see below, the mangrove swamp is prolific and provides handy tie off points for the radials. I achieved the best results to date with this system. For those who have studied the subject, as I have, the question of how to optimize  RF ground system for a vertical over salt water is not so easy to answer. A careful study of "Low Band DXing" for example can be quite confusing because the information, while useful, is often contradictory. John quotes some sources who say that just a couple (or even one) elevated resonant radial is ideal, while others say that at least six elevated radials should be used and they should be very high off the ground (.1 or .15 wavelengths). Others say that a bunch of non-resonant radials will work better unless these ideals are met. While I continue to gather data, I don't yet know what is correct. However, everyone seems to agree that throwing a wire into the salt water is not the answer. The 2004 experience suggests that a system comprised of a bunch (ten to twenty) fairly short radials (30 feet), do a great job when the antenna is over salt water. 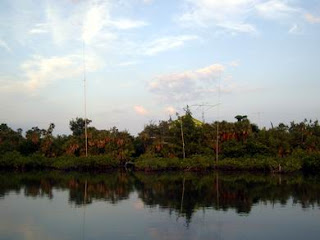 Antenna description and photo for V31DJ - February 2003 at the QTH of V31MD. The feed point is tied to the post in the the left foreground. The vertical element is run up through the eyelet on the 50' pole and over to the white PVC mast on the house. Also visible are the R7 vertical on the left in front of the house and the HF2-V on the right. The A-3 Yagi is barely visible behind the PVC mast. The radials for the 160 vertical are not visible, but run away from the post to PVC masts set in the salt water lagoon.